Energy security can be considered as development of alternative, in particular, renewable energy. Therefore, the problem of energy security by increasing the value of the thermoelectric power is a key issue for the project.

Number of traditional sources of energy in the world is sharply reduced (oil, gas). There are the problems for functioning of hydro and nuclear energy stations, because must be a lot of water for their work, and the problem of drinking water for population is only growing. 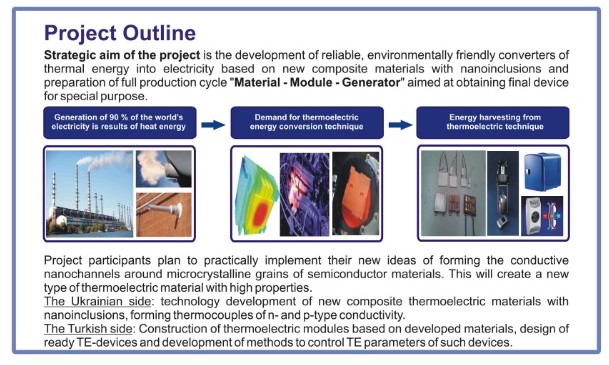 The project purpose is development of technology of the innovative composite thermoelectric materials on the base of IV-VI semiconductors (PbTe, SnTe) with nanoinclusions and enhanced parameters for medium temperature range (450-800) K, and creation on their basis of reliable, non-polluting thermoelectric modules for practical use as source of alternative energy, cooling units (medicine, computer servers, IR-sensors), as well as special applications (space, cathode protection, transport and military purposes).

Energy security is a critical component for national security of any country and the world at large. The energy security priorities include: reduction in specific energy consumption (energy saving), the development of alternative sources of energy, and environmental safety of energy.

The application of thermoelectric conversion of heat into useful energy is one of the promising in areas of energy security increasing. However, the widespread use of thermoelectric generators is hampered by lack of economically viable technology of the effective thermoelectric materials for medium temperatures range and modules based on them.

Efficiency of current industrial applications, primarily working on traditional sources of energy is not too high and reaches in the middle, regardless of the sector of production, from 25 to 75%. That is, a very large part of the energy is simply released into the air. In addition, up to 90% discharged (outgoing) of heat energy is released at industrial facilities and equipment with the surface temperature up to 600 K, making a significant contribution in environmental degradation, and greenhouse effect. The use of thermoelectric energy conversion is a very promising solution in such circumstances. 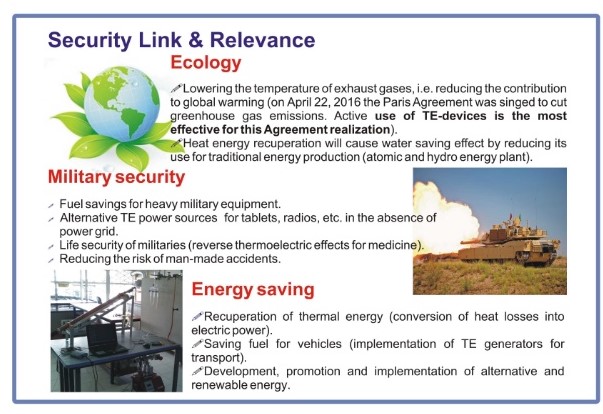 In addition, due to the high cost of research and experiments, only large producers of thermoelectric products can afford to creation of new efficient thermoelectric materials and modernization (replacement) production lines to introduce them.

Increase the share of alternative energy in the world thermoelectric is the most important problem solved by the proposed project. In particular, to expect the greater use of the conversion of thermal energy into electrical energy in the temperature range (450-800) K. Efficiency of the energy conversion is not sufficient for the large-scale transition to the thermoelectric power sources. The scientific aspect of the project involves the creation of high-performance composite materials based on nanoinclusions semiconductors PbTe and SnTe with the creation on their basis of complex multi-component compounds, making combinations of various impurities, as well as making nanoinclusions of high-melting materials, which will increase the efficiency of the existing 5-8 % to 10-15 %. Large amount of information materials to create about the advantages of thermoelectric materials for the public and producers also planned in project. Collective monograph will publish on the thermoelectric materials science, as well as the materials technology and their practical application. Successful PR-campaign will be a key point for large-scale use of thermoelectric products.